To share your memory on the wall of William Cade, sign in using one of the following options:

Bill was done with school or school was done with him by the 8th grade. He went on to work picking produce in the fields, loading and unloading trucks, landscaping, working at Grandpa Chester Cochran and Daisy’s Cochran’s Piggly Wiggly Store in St. Francis, Kansas. He learned how to drive trucks, drove over the road and later became a heavy equipment operator. He worked for Coors, Wadsworth Excavating, Beghtol Trucking, and MBR Trucking to name a few. He retired at age 62 to spend time with his grandchildren.


His funeral service is being held at Arvada Cemetery, for close family members, where he will be buried next to his father Kenneth Cade.

Receive notifications about information and event scheduling for William

We encourage you to share your most beloved memories of William here, so that the family and other loved ones can always see it. You can upload cherished photographs, or share your favorite stories, and can even comment on those shared by others.

Posted Mar 09, 2021 at 05:48pm
One of my favorite memories of my Uncle was when he would take Mitzi and I to work with him when he worked down below Olde town Arvada. We knew we were gonna rule the roost! It was a large yard that had heavy equipment and other stuff on it. Uncle Bill would go off to work or take care of something in the shop and Mitzi and I were given the freedom of driving around and within the yard! Needless to say... We were driving way before we were sixteen! I also remember staying on the farm, riding in his semi, and when we would visit him in the mountains and he took us horse back riding. 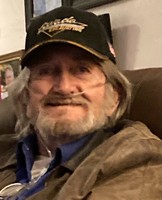